It’s been a long while since posting in this blog. Our Internet has unpredictable mood swings. Sometimes it’s slow, sometimes there is no getting on. Sometimes it flows like melted butter on my pancakes. Don’t eat pancakes much, so there you have it. To top it off, I was sick with a head cold for two weeks and then went on a four day trip to Michigan. I am catching the Internet while the going is good.

So far we have planted 80 onion bulbs, two rows of peas and one row of spinach. We decided to hoe out the pond garden. This is one plot that has confounded us for the past 27 years. It’s a horrifying mess of Anemone and Yarrow roots. You have to take a shovel and dig deeply to pull up the stuff. Then sift through it until the soil is clean again. We added reams of Caledonian-Record newspapers covered with hemlock mulch. We are on the other side of this madness.

I need to comment briefly about Game of Thrones character Theon Greyjoy. I underestimated the effects of Ramsey Snow’s abuse on Theon, now Reek’s, psyche. He has been completely co-opted by Ramsey and now suffers from Stockholm Syndrome. If only Theon’s sister understood this psychological phenomenon. She might have  brought Milk of the Poppy to the rescue and knocked out Theon. Eventually, he might heal from his trauma. Meanwhile, Ramsey has some kind of twisted plan to use Reek, playing his original identity as Theon Greyjoy. One can only wonder when and how Ramsey will encounter his Karma. Everyone dies on Game of Thrones. 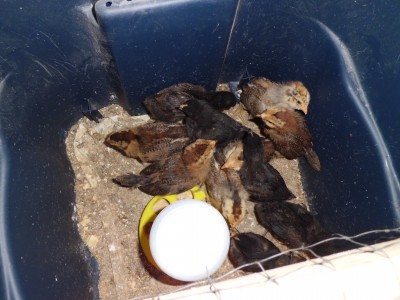 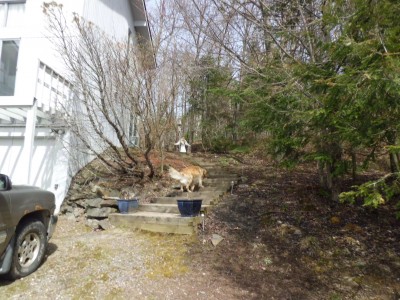 Hank running up the side stairs 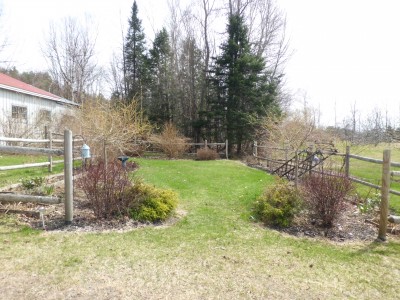