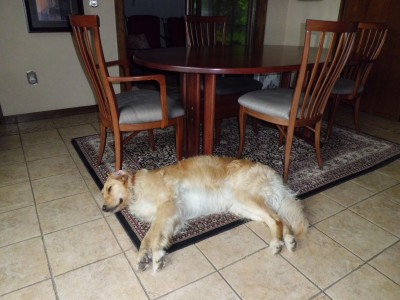 Where are the kidz?

This is Hank sleeping and dreaming about Drize-a-roo 2014.  He spent an entire week learning the likes and dislikes of each kid. Who likes to play like a dog. Who likes to teach lessons old-school fashion. Who likes to run up and down the driveway. Who doesn’t mind wet, smelly paws and drooling on their laps. Who doesn’t get tired of non-stop petting. Who enjoys looking but not touching so much. It was dog heaven…..

I have been thinking about Caledonian-Record ongoing articles about the “undesirable” individuals living in St. Johnsbury. The Selectboard just learned that Vermont CARES distributes 75 thousand needles every year. Fifteen needles were found in parks and on roadsides during the year. Not a bad ratio. Simmer down Selectboard. There was a provocative letter to the Editor from an individual who tends to lean towards Tea Party philosophies. Slammed the Selectboard for passing the “Profanity” ordinance. Asked them to define profanity. Made a point that St. Johnsbury Downtown went to hell in a handbasket with the closing of Hovey’s Department store and the Green Mountain Fruit Market. Shamed the individuals who are calling out Depot Square tenants. Stop blaming the poor. It’s so easy, they don’t have time to represent themselves politically on any level. Too busy getting surviving the day.