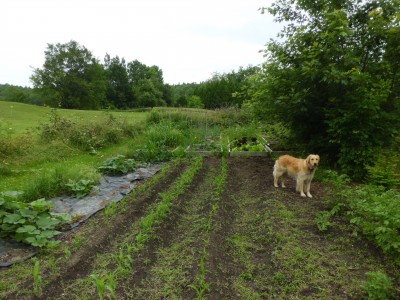 Planted beets and carrots for the third time. We have been so focused on indoor projects, that we neglected the garden. The electric fence is not working. Deer, rabbits and who knows what other creatures have been feasting on the snow peas, bean plants, spinach. Cleared out all the carrot and beet seedlings. Last summer, I spent a lot more time in the garden and brought Hank with me. He did his rounds sniffing, peeing and generally spreading his dog essence every which way. I like to think that this was critical in keeping the interlopers at bay.

I watched The Patience Stone last night and was entranced by the acting and dialogue. It was a complicated story told in the simplest fashion. The film relied on a beautiful actress whose expressiveness made reading the sub-titles almost unnecessary. I cannot remember her name, but know that she is Persian. It plumbed provocative issues about gender, sexuality, religion, morality and politics. The setting is probably Afghanistan although no country is identified and no names are used. The main character is taking care of her husband who is in a vegetative state after being shot in the neck. He is a rebel fighter and she goes to great lengths to hide him from harm. She uses this opportunity to talk to him in a way that was not possible before his injury. Clearly, it is an oppressive relationship that now benefits from this woman’s need to tell her husband all of her secrets. He is a captive audience who, because of his physical state, listens completely and non-judgmentally. At least it looks that way. The Patience Stone is one of the best films I have watched in years.