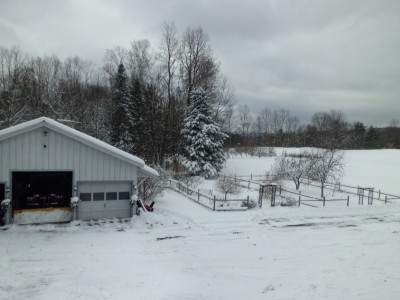 The plow truck safely parked in the barn. We had an episode this morning. Craig set out to plow the driveway after last night’s storm. We got 11 inches of snow. I saw him walking up the road which is not a good sign. The truck was stuck. Tommy wrote the book “My Dad Got Stuck”. And he tried, and he tried and he tried and then he got unstuck. It’s a good story. We drove back down the driveway in the blue truck. Tried pulling it out using the truck’s power. The plow truck tires just dug in deeper. Craig says that the road has not properly hardened so he was not able to get good traction. We went back up the driveway to retrieve the winch. Hank road shotgun. He provides a lot of emotional support. This time Craig was successful and the plow truck emerged from it’s snow cave as if nothing had happened.

I love the snow. You would think that by this time and after the many trials and tribulations through the years of stuck vehicles, storms, loss of electricity and just the elaborate maneuvering it takes to get out of the house I would prefer a sunnier climate. Last night I was driving home from work and the snow was so soft and light that it made me feel blissful. I walked into my warm and welcoming home and thanked everyone (you know god, goddesses, earth mother) for winter.