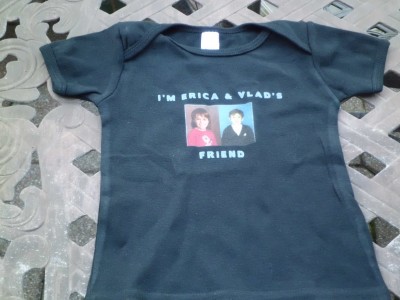 The wedding actually began with the announcement in May.  Erica and Vlad were engaged and wanted to get married at the house. I was all for it. It’s so much fun when the kids show up for vacations. New smells, people to snuggle, boundaries to push. Then Michele started saying things like And this is why you are not invited to the wedding. I didn’t take it seriously because let’s face it, I get away with a lot of foolish behaviors. Michele and Craig are push-overs for my soulful brown eyes and elegantly plumed behind. Rumor has it that I am the first dog allowed in the parents’ bed. I am actually the first dog allowed to stay in the house. Yeah right, I thought whenever the mantra about my dis-invitation was bandied about. It turned out to be true. I spent two days at a pet boarding center in New Hampshire. It wasn’t so bad. They read everyone bedtime stories and there was plenty of play-time with the other dogs. In fact, there were three other Golden Retrievers staying at the center while I was there. The staff told Craig that I was the best behaved. I’m not going to lie, the pet center is a nice break from Craig and Michele. They feel guilty about sending me there and shell out top money for the Mount Washington package. I’m worth it.

The wedding was held on August 29. I was not there for the ceremony but got to observe the preparations that began when Erica and Vlad called. Immediately lists started appearing. There were truck loads of mulch, flowers and trees. Packages from Fed Ex and Amazon.com arrived regularly. Craig was inspired to develop a 3 acre vegetable garden in addition to the raised bed garden. The corral was renamed the “wedding garden” and even more flowers were added right up until guests started arriving. Michele piled boxes of decorations in the French Room. I saw Michele show Craig a tiny t-shirt. Isn’t it cute, she said, this one is for Simona. I wondered what kind of human could wear such a small t-shirt. Turned out to be a delightful baby. Later I heard the story about Erica designing a t-shirt for Christopher’s graduation from AFI. There was a picture of nine year old Christopher licking a lollipop with the words I am Chris’ friend. Christopher was only too happy to design a wedding t-shirt featuring childhood pictures of Erica and Vlad. Of course they said I am Erica and Vlad’s friend. Where was my t-shirt, I thought. Oh well, Bear didn’t get one either.  I haven’t mentioned Bear yet, have I? Bear belongs to Tom and Elise. He flew in from California and made a big splash with the family. I assumed he would be my companion during the wedding week. Bear took one look at me and barked with a ferocity that belied his small stature. The humans were mystified by our dynamics. How could such a small dog intimidate an 80lb. dog? Think Napoleon terrorizing his way through Europe. Now you have some sense of how I was marginalized then leashed to various posts in the house and yard. I will admit that Bear has lovely manners and does not jump on humans. They don’t like the jumping and I can’t seem to contain myself.  Erica and Vlad arrived on Sunday and that’s when the real fun began.