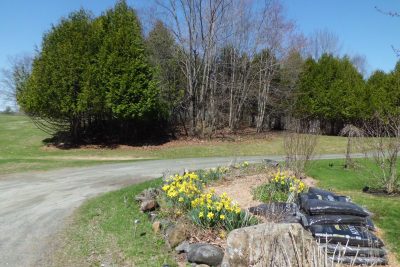 Daffodils in the Eyebrow garden.

I sat on the back porch and read Varina by Charles Frazier. It’s about Varina Davis who was married to Jeff Davis the first and only Confederate President. She was an amazing woman who was not of her time and, yet, very much of her time. She gave birth to at least 10 children and lost most of them to illness and accident. She wrote in her memoir that she spent 10 years in a black mourning dress. One year for her husband,  9 other years for her children. It’s a sobering perspective of a southern woman’s life before, during and after the Civil War. She got by on red wine laced liberally with opium as was the style in those days.

Flash forward to present time and it seems that the President is “nuking” the Iran deal and raining down on the country with sanctions . The New York AG resigned following allegations by four women that he victimized them using emotional and physical abuse. The MeToo movement is not slowing down and possibly getting closer to the President. The millenials (are 18 year olds millenials?) continue their march towards gun control.  Varina Davis became a journalist and I am interested in her thoughts about one of the most defining periods in our country’s history. I am going to channel Varina as they think about these interesting times.